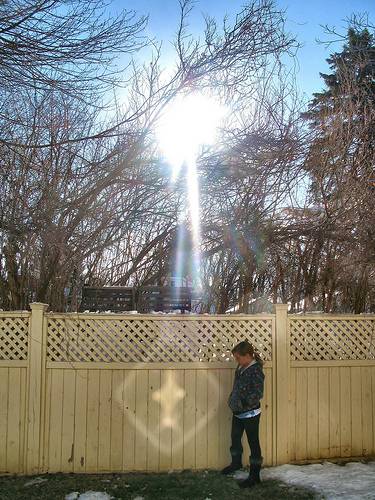 Since 2005 a cross with an outline of a shield has appeared annually on my property in Mine Hill, NJ. Once again on March 27, 2011, rays of light from the sun are shining on the fence and creating an image of a cross. This image has been showing up every morning since last week. The image appears at the top of the fence and slowly descends until it touches the ground. It then changes into a circle and disappears. The cross can be seen for about 30 minutes. My wife had her cousin Diane visit our home with her family on Saturday, March 26, 2011. Her cousin's daughter, Brooke stayed overnight. The cross appeared Sunday morning and she is standing next to the image in awe. Brooke said, "It looks like Jesus." Photograph Copyright 2011 Loci B. Lenar